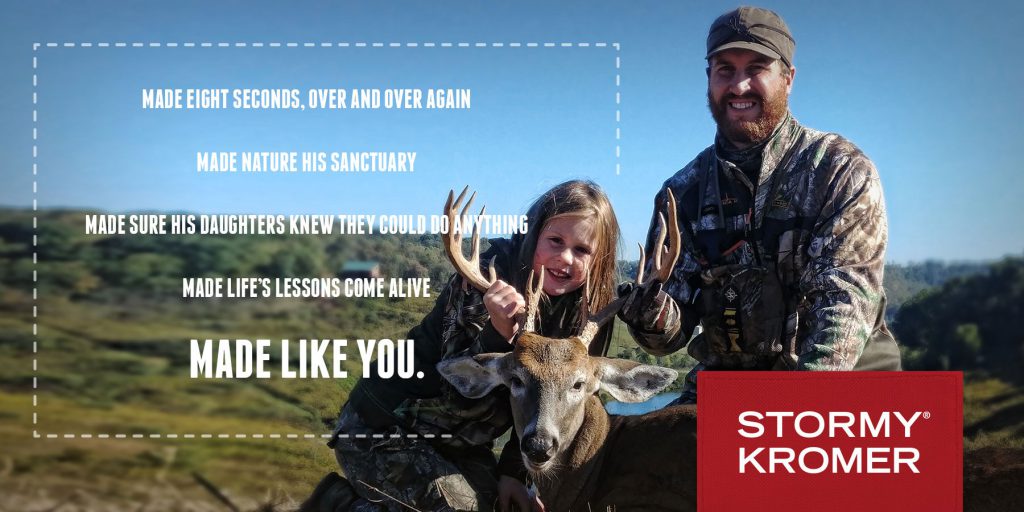 Once, for an agonizingly long stretch of eight seconds, Cole Chambers white knuckled a rope pulled taught around the muscled, bucking midsection of an irate bull named Diesel Smoke. He didn’t fall off.

Cole was 22 at the time, which meant he had already been a professional bull rider for six years, and practicing since the age of nine.

“It was an individual sport, not a team sport,” he says of his attraction to riding. “I wasn’t worried about winning or losing from someone else’s performance. It was all up to me.”

But all those eight-second stretches took a long-term toll. After a knee injury, a surgery, and fifteen professional years on the backs of bulls, Cole decided to reinvent in order to focus on life’s next wild ride: raising a family.

Now, with two young daughters, Cole and his wife are committed to nurturing a strong sense of conservation and outdoor stewardship among their children.

“My oldest has been going hunting and fishing with me since she was about two and a half,” says Cole. “For me it’s about passing on what I’ve learned. My dad taught me, his dad taught him. It’s not something you’re going to learn in a classroom.”

The patience. The waiting. The sometimes not seeing anything more than a squirrel for hours, or not feeling more than a nibble for what feels like an eternity. According to Cole, that’s good stuff, too. And good for kids to learn early.

“I was taught at a young age that it’s not about going out and killing an animal,” says Cole. “It’s about respecting and taking care of nature. It’s about learning why we do what we do: scouting for animals, learning the science, the atmosphere around you inside the woods.”

And within that atmosphere Cole says he feels the most peace and introspection. A place removed from the everyday worries of bills and errands. A place to sit and, sometimes, simply think.

“The outdoors is my sanctuary,” says Cole. “I can go out and talk to God by myself. I feel more connected to him out there. It’s nice passing that peacefulness along.”

Cole also passes along a sense of empowerment and agency to his girls, who know they can do anything they find an interest in, including wrestling on the boys and girls team coached by their dad.

“Just because you’re a girl doesn’t mean you have to do ‘girl’ things,” says Cole. “Trying is the main thing—trying things you may be uncomfortable with.”

But even bull riding?

“I would actually be very supportive,” says Cole. “I would also tell them the same thing I’ve always told them when they want to start something new. That is, they can try the sport but if they decide to continue there will not be any quitting half way through a season.”