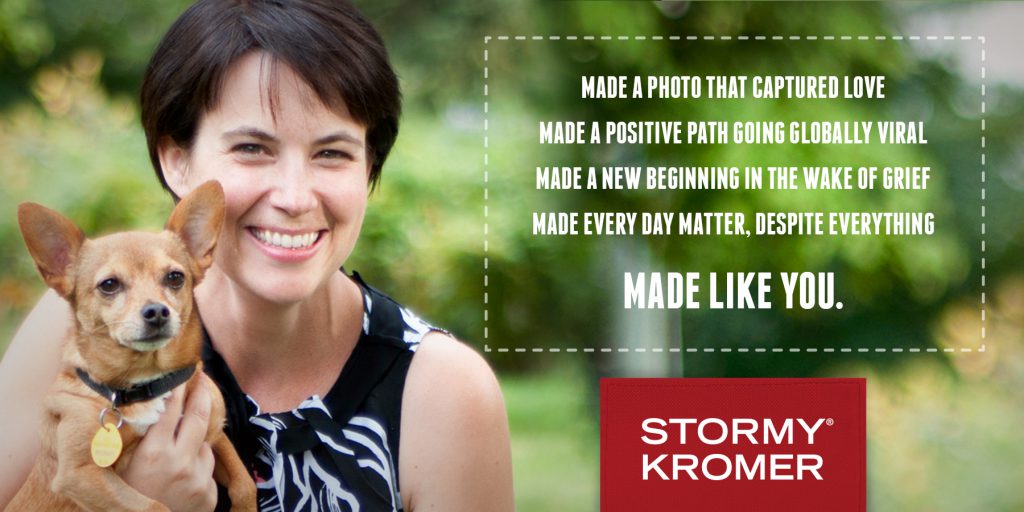 The most beautiful thing Hannah Stonehouse Hudson ever witnessed was on a photoshoot with a man and his dog.

The man, John Unger, knew he had to put his dog to sleep. Schoep suffered from debilitating arthritis, and John understood intuitively that it was time.

But first, to capture a moment, and one free from the daily pain of Schoep’s strained movement through life. John called Hannah to photograph he and Schoep in Lake Superior, the one place that seemed to not only calm the dog, but release Schoep from enough pain to let him rest.

Hannah’s camera clicked, the moment seared into its digital memory: a dog in perfect peace draped over a caretaker kind enough to give him this—precious sleep in the cold sway of a great lake.

When Hannah posted her photo on her Facebook page, something about the image sparked, then ignited. A thousand shares turned into a million. A smattering of media coverage turned into a deluge. A simple, still scene became, for a moment, “the most viral photo of all time.”

“People said I had captured love,” says Hannah in a recent Ted Talk. “Soon, we were all over the world. For about two months my voicemail would fill up five or six times a day.”

But folks who have been around long enough already know this—the inextricable overlap of love and lament. How one begets the other, curves back and begins again.

Not long after she began navigating a new life of viral fame, Hannah’s husband, Jim—a former police officer and experienced fishing guide—cracked through the ice on his snowmobile and plunged into the same lake that once gave Schoep a respite from the pain.

Jim was suddenly gone. And Hannah had to again forge a new path, this time feeling her way through a thicket of grief.

“Life is short,” she says emphatically to her Ted Talk audience. “Add nothing but love and kindness.”

With that notion, Hannah found her way forward. She now guides others through heartbreak, through crises, but she also continues to capture small, beautiful moments of animals and people, documenting the strange and wonderful alchemy that takes place when the two come together.

“I want to capture the fun and tender moments in life on film (or in pixels) so that people can go back and look at them and FEEL what they felt then,” says Hannah. “As a widow, I know how important it can be to draw upon those images in the worst of times when all you can envision is the end. This is why I capture what I do.”