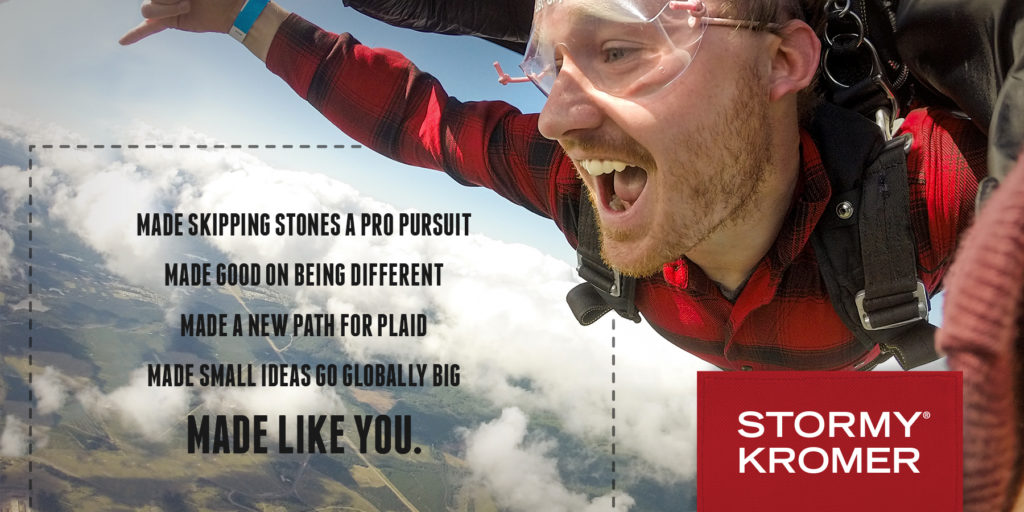 On the shark-free fresh water of Michigan’s Mackinaw Island, though, the screams of this particular crowd are exuberant and goading and—when one of the professional stone skippers vying for national prominence sinks instead of sails—aghast.

That’s a lot of noise. So when Bugsy Sailor, a pro skipper itching for the 2017 title steps to the water’s cacophonous edge, he’s thinking of the serene conditions of his practice spot on Presque Isle where it’s just him and the seagulls and the small sound of surf, and how this is totally not that.

“The peace and zen of doing it on my own is replaced with excitement and energy,” says Bugsy, who has skipped professionally since 2008. “I want that roar.”

To get the roar requires timing the wake cast in from boats, doing a hard and quick calculus built on an ever-changing liquid surface, and micro-adjusting your hand-picked rock, all while a judge counts (out loud) to keep you from lingering too long.

“As simple as skipping is, there’s still this amazement each time you throw a really good stone,” says Bugsy. “It’s like: look at this cool thing that seems to somehow defy physics or gravity. There’s a real ephemeral quality and beauty to stone skipping.”

Bugsy’s first throw in 2017 was decidedly not a moment of beauty. After making a grand entrance with his father in the role of a PGA-like caddy, dramatically analyzing the wake and the waves and arguing his way to the perfect stone as if trying to choose the right iron, Bugsy released his rock.

It immediately kerplunked to the bottom without a single skip.

The crowd gasped and booed. Some reluctantly laughed. Bugsy now had to dig himself out of a watery hole.

Don’t worry! He did just fine, taking third place overall with a single throw of 29 magnificent skips—his best performance at Mackinaw yet.

Bugsy’s entire life mirrors that small stone thrown with great velocity and the ripples moving outward from the effort.

Since writing papers on overlooked subcultures in a Baraga, Michigan high school of 44 students, he has worked to draw the attention of a large, digital-age audience to the small and overlooked. To the mostly homegrown things that matter most to him.

“I love when I see people take delight in the tiny nuances of life,” says Bugsy. “With stone skipping, with the U.P., with plaid, I love niche environments and hobbies.”

By plaid and the U.P. Bugsy means his global advocacy for the criss-crossed pattern dismissed by many as “lumberjack,” his desire to plant a Yooper embassy in Lansing with presumably himself as the ambassador (he’s already got the official title) and, more recently, his work with the Fresh Coast Film Festival and an online platform for Upper Peninsula singles to connect and share their lives.

“Since I was thirteen I looked for ways to stand out out,” says Bugsy. “I was in perpetual upstream mode, yet wanted a few other fish to come with me. Then the internet opened up my world to what was possible in reaching people.”

He’s reached a lot. Participants in 2017’s Plaidurday, for example, stretched from Taiwan to Iron Mountain to a library in Denmark.

“As a kid I went against the grain of the traditional route, and kind of found myself in doing so,” says Bugsy. “Now, I feel strongly that my purpose on earth is to take ideas and make them reality.”