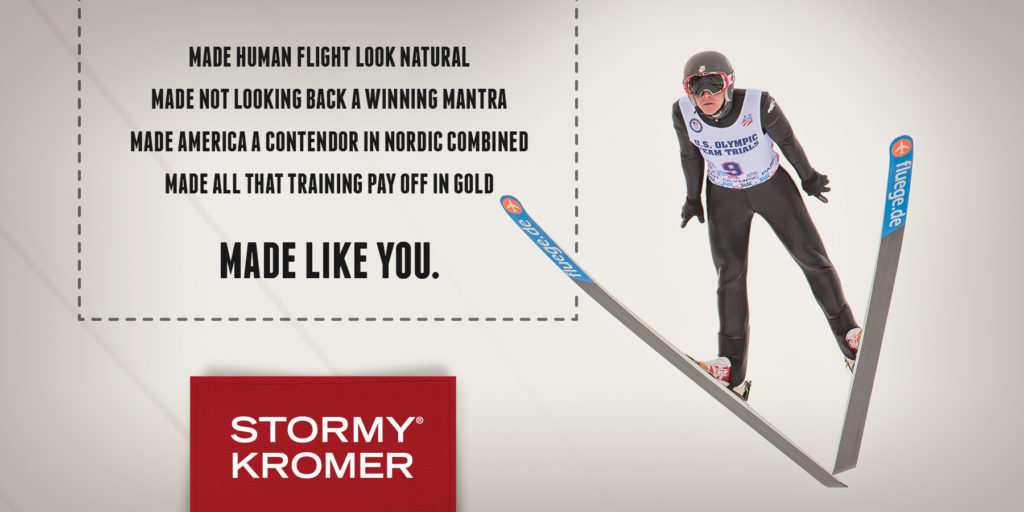 Some days are more lazy than others and sometimes you sleep late and snack unwisely and decide, Nah, I’ll just leave the pajamas on in order to spend a little more time perusing funny cat videos on YouTube only to come across—purely by chance, having nothing to do with a beneficent universe trying to send you a message—a video highlighting Billy Demong’s utterly heroic gold-medal performance on skis at the 2010 Winter Olympics.

Here’s where you mumble to yourself: Maybe I should put on some pants.

Billy Demong is bright-eyed and ever-youthful and, at 37, profoundly accomplished in the world of ski jumping plus cross country, which is the two-for-one sport known as Nordic Combined.

Such a sport combo doesn’t exactly get the media attention of, say, NASCAR (at least in the United States), but Billy’s victories are a big deal. No American before his Vancouver performance had ever won gold in any Nordic skiing event in the 86-year-history of the Winter Olympics. And no one since.

“Until I was about five, ten, fifteen feet from the finish line I didn’t know if I was going to win,” says Billy in the grueling video that might just make you want to start training. For something. “I just kept my head down and kept pushing.”

But something special happens when Billy keeps his head down and pushes hard. Even if he’s separate from the pack, totally alone and totally in front, he still sees the image of a skier hot on his tail, huffing right next to him in order to grab the gold.

With this peripheral illusion Billy Demong made Olympic history.

“When I crossed the finish line I was like: I won,” he says in an almost flippant tone. Then, with increasing exuberance he continues, “And then it started to sink in second by second…I won…the…Olympics…Holy…Oh my…”

But what initially draws an obviously athletic kid to a sport some might consider obscure? For Billy, why not baseball?

“I so desperately wanted to fly,” says Billy over the phone from his home in Park City, Utah, where he is the Executive Director of USA Nordic Sport. “My interests were different from the other kids.”

Indeed. Billy grew up surrounded by a team of budding athletes and trainers and even a few Olympic champions, all of whom contributed to a nurturing atmosphere perfectly geared for Nordic Combined.

But Billy had a problem. In addition to gravity and the challenge of launching down a constructed chute into cold, thin air, Billy Demong, for all his desire to soar, couldn’t get his body to snap into position.

“I was a late bloomer,” admits Billy. “Jumping is such a technique-driven discipline. I just couldn’t get the hang of diving out over my skis, which is what it takes to jump far. I wanted it, but I couldn’t get my body to do it.”

We should pause here to appreciate the precise challenge of ski jumping which, according to Billy, is essentially hurtling down a gigantic snowy ramp at sixty miles an hour heading toward a cliff edge over which you must launch while simultaneously thrusting your butt above your head.

“That’s what it feels like to do it right,” he says. “You’re physically laying on the air.”

At sixteen, Billy knew he had to do it right, to fly or die trying.

Needless to say, he found his flight. Over the course of a few weeks he moved rapidly from an inability to lean out over his skis to one of the best juniors in the country.

Even after that pivot toward success, though, it still took Billy’s deep and abiding obsession to train himself into the upper echelons of competition where, day after day, he had to manipulate his body and mind to get a few seconds faster or stay alight a few seconds longer.

“Some people might say I don’t want to go out and hurt for three, four, five hours a day,” says Billy. “In my mind, part of the enjoyment was feeling that burn, and feeling that pain.”

Now, as a husband and father working hard to make sure his beloved sport is well-funded and a pipeline of dynamic athletes will keep the USA in contention for gold, Billy thinks of his own children, the oldest of whom is already jumping.

“In Park City, which is rife with Olympians, every parent feels this desire to steer their kids into an Olympic career,” says Billy. “But it has to come from within. It cannot be forced. It can be guided, but it cannot be forced.”

The Olympic trials for both Nordic Combined and Ski Jumping are this weekend. Click here for the full schedule and ways to watch. To learn more about USA Nordic and to support their efforts, click here.