Pet of the Month: March 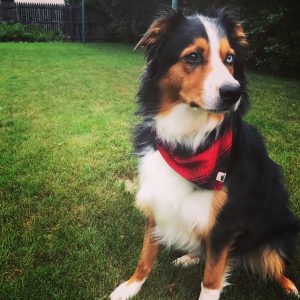 We can’t believe how quickly the year is moving and it’s already time to share the story of our March featured pet – Toast. This beautiful purebred Australian Shepherd was submitted by his owner, Scott.

Toast came into Scott’s life when he met his girlfriend Patty. A few years earlier, Patty was watching Toast over a weekend for a neighbor in her apartment complex. A long and sad story short, after the weekend the original owner never came back for the dog and just wanted to be rid of him.

Thank goodness Patty stepped in! She changed his name to fit his spunky personality and his black and golden coloring. (His original name was Ghost, and Patty loved how Toast both sounded similar and fit him so well.)

Toast is a Yooper dog who spends a lot of time at the beach, although the first time Scott and Patty took him swimming in Lake Superior he was so scared of the waves he wouldn’t go in and started barking at each wave!

Because of his breed, Toast naturally herds things – even without any prior practice or training. At a friend’s house he was introduced to a group of ducks and chickens and he immediately began corralling them into their pen.

We think he looks very handsome in his SK Pet Bandana – and ready for whatever life in the Upper Peninsula will throw at him next!

2 thoughts on “Pet of the Month: March”